After several weeks of eager anticipation, yesterday was finally the day.

Yesterday I received my results for 23andMe, the DNA analysis programme that gives you the lowdown on your ancestry and any genetic health risk factors you may carry.
And while my results were pretty much as I suspected, I found out something pretty cool. According to 23andMe, 2.6% of my genes come from Neanderthals!
Now that’s actually slightly lower than average for someone with who is predominantly European. But what exactly are Neanderthals and why are they so cool?

If you managed to take a look at my post about evolution from last week, you’ll remember that anthropologists have actually found a number of our evolutionary ancestors. Most of these ancestors died out before anatomically modern humans were on the scene — but not so with the Neanderthal! We had a pretty significant overlap, which we clearly made the most of in a reproductive sense. As we (humans) could successfully mate with Neanderthals, this makes us fellow subspecies of human. Modern humans are known as Homo sapiens sapiens, and Neanderthals are known as Homo sapiens neanderthalensis. There has been a lot of back and forth between their species classification, but the DNA evidence proves we could and did mate with them, so they are absolutely positively a subspecies.  So if anyone, including an anthropologist, gives you flack for this subspecies attribution–send them to me.
Neanderthals are called this because the first fossil associated with the subspecies, or holotype, was found in the Neander Valley in Germany. Although other Neanderthal remains had been found before this, they were only later categorised as such.  Here is the geographical area that Neanderthals were thought to inhabit courtesy of Wikipedia:

So what makes a Neanderthal different from a modern human? There are a few notable differences.
Neanderthals had prominent supraorbital tori and occipital buns, meaning that their foreheads and the base of their skulls were quite large. And because their skulls were shaped differently, their brain architecture was also different. In fact, their cranial capacity was higher than ours, but because the parts of the brain responsible for speech, like Broca’s and Wernicke’s areas, were smaller in Neanderthals they would not have had the same capabilities for language. 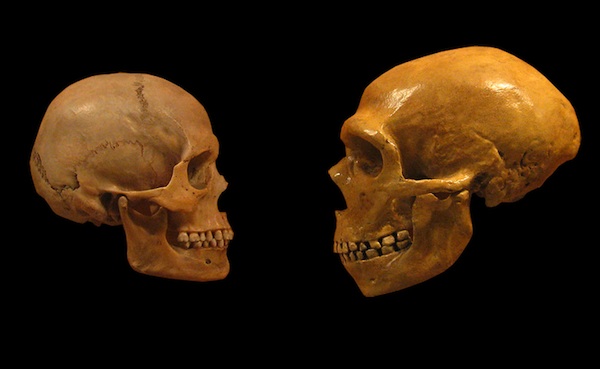 In this sense, the stereotypical grunting caveman is correct. BUT there are several studies that indicate their hyoid bone, the bone in our throat, was situated higher than ours. This would make their voices correspondingly higher! So imagine a caveman with a high pitched grunt instead.
Neanderthals also had larger nasal apertures (where your nose goes). This is an adaptation to cold weather, as the air they breathed through their noses was warmed more effectively before entering their lungs. And we can still see a similar adaptation in populations from colder climates, although not as big as the Neanderthals.

Image source Fun fact: this is Gibraltar I, and my absolute favourite. I grew up with a cast of it in my house.

Neanderthals were barrel chested and their arms burly. This has been attributed to spear thrusting but also to the scraping of animal skins. Click here for some interesting reading on the subject.

This brings us to the question of cultural diffusion.  We know that humans and Neanderthals were living near each other and having sex, what we don’t quite know is how much influence there really was between the two groups in terms of material culture. We can identify tool making techniques that are associated with one subspecies or the other, what is slightly strange is that there seems to be little or no crossover–even when we know they were interacting with each other.  Some anthropologists argue that this makes us different species, but that is a remnant of archaic palaeoanthropological theory (more on that later).

Some anthropologists posit that the reason why humans eventually outlived Neanderthals is that we are better at learning new techniques and thinking outside the box, and Neanderthals just couldn’t keep up. But it’s still unclear. We may have just killed them all off. What we know is that they went extinct about 40,000 years ago.

Have any Neanderthal related questions? Let me know!

One thought on “Who were the Neanderthals?”